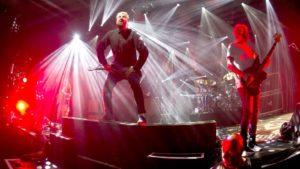 “Every once in awhile you get to share the stage with a band so powerful they make you work harder,” Rise Against says of Deftones before 21-date trek.

Raucous rockers Deftones and Rise Against will partner up for a co-headlining tour this summer.

“We’ve been talking to Rise about touring together for a while now. Finally, everything aligned and we get to spend the summer playing shows with our friends. We couldn’t be more excited and can’t wait to see you at the shows,” Deftones said in a statement.

Rise Against added, “Every once in awhile you get to share the stage with a band so powerful they make you work harder. After conspiring for years, we’re excited to finally share the road with such an epic band. We can’t wait to put Deftones and Rise Against fans under the same roof in 2017.”

Deftones released Gore, their first album in four years, in April 2016. Rise Against, meanwhile, have largely been on a break since the arrival of their 2014 LP The Black Market; in 2013, singer Tom McIlrath told Rolling Stone the band needed to “recharge batteries” after a grueling two years on the road touring.