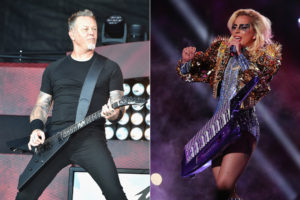 With the performance just a few days away, hopefully Metallica frontman James Hetfield will have fully recovered from the ailments which have forced the postponement of the band’s Copenhagen shows. The singer powered his way through a Feb. 3 show, admittedly struggling with vocal issues, even asking the crowd if the band should stop and come back another night to deliver the standard quality performance.

Metallica will also be playing a show at the Hollywood Palladium directly after the conclusion of the Grammys, which airs Feb. 12 at 8PM ET on CBS.

The collaboration should come as no surprise as Lady Gaga is a known metalhead, openly praising the likes of greats like Black Sabbath, Iron Maiden and Judas Priest. In August of 2015, she even said she’d rather be the next Maiden than the next Madonna