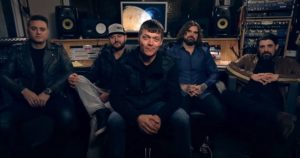 3 DOORS DOWN will perform at the concert on Thursday (January 19), one day before Trump is inaugurated as the new President of the United States. The event, which is open to the public and taking place on the steps of Washington, D.C.’s Lincoln Memorial, will also feature country artists Toby Keith and Lee Greenwood, the Piano Guys and actor Jon Voight.

Other participants in Trump’s inauguration plans include “America’s Got Talent” singer Jackie Evancho, THE ROCKETTES and the Mormon Tabernacle Choir, although members of both the latter groups have expressed concern about performing at the even...

Watch Lamar Odom Open Up About Battles With Drug Addiction

Before Lamar Odom voluntarily checked into rehab last month, he appeared on an episode of The Doctors to talk about his battle with addiction. In the interview, the former Los Angeles Lakers star revealed he “wasn’t in a good place mentally” before he nearly lost his life to a drug overdose four months ago and said he and his wife at the time, Khloe Kardashian, were “going through some things.”

Now that Odom is back home – he checked out of Casa Palmera Treatment Center in San Diego, California on January 5th – Odom returned to the show on Tuesday to give an update on his life.

Odom touched on a number of topics in the hour-long episode, ranging from how he was “basically just committing sui... 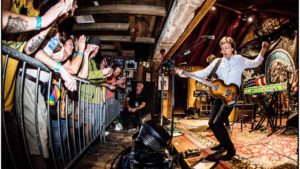 Paul McCartney has filed a federal lawsuit against music publisher Sony/ATV, claiming ownership to songs he wrote with the Beatles. The singer-songwriter hopes to regain his copyrights to songs such as “Yesterday,” “Hey Jude” and “The Long and Winding Road” in October 2018. A rep for McCartney said that the paperwork, filed in a U.S. District Court in New York, is meant “to confirm his ownership” of the songs “which are granted to him by US copyright law.” The lawsuit claims McCartney has been making several such legal filings since 2008.

The former Beatle is seeking a “declaratory judgment,” according to The Hollywood Reporter, to ensure the transfer will not be prolonged...

Soundgarden are about to make good on a “correction” they’ve long sought. The band will deliver a newly remixed and expanded reissue of their Grammy-nominated full-length debut disc, Ultramega OK.

The band initially recorded the album for SST Records, but were never really quite happy with the final mix of the disc and had intended to remix the album for subsequent pressings, but after singing a deal with A&M and starting work on Louder Than Love, they never got around to that planned remix. Now, just shy of 30 years later, the band will reissue Ultramega OK with a fresh remix.

In 2016, the band finally acquired the original multi-track tapes from the Ultramega OK sessions and found time to dig into the project...

The rapidly growing Rock USA is returning again to Oshkosh, Wisconsin. In its seventh year, Rock USA is bigger now than it has ever been before, with superstars like OZZY OSBOURNE, AVENGED SEVENFOLD, SLAYER and KORN taking the stage July 13-15.

“Last year was a pivotal point in the history of this festival,” says Derek Liebhauser, promoter of Rock USA. “We made some big decisions to enhance the overall festival experience for our fan. The response has been overwhelming for us.” Things like adding bands, shortening breaks, lengthening sets, and honing in on the talent mix are among the changes that have driven this festival into its rapid growth.

Additionally, in 2017, Rock USA is curating a brand new food and beverage experience for the festival in partnership with Southern Hospitality Co...

METALLICA’s James Hetfield has narrated a new documentary which takes a sobering look at the impact pornography addiction is having on the individual and on cultures around the world. 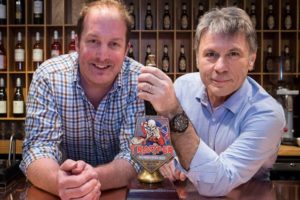 Robinsons Brewery and IRON MAIDEN have unveiled a strong new look for their multi award-winning Trooper beer ahead of an exciting year for the brand.

The beer, created by Robinsons and IRON MAIDEN frontman Bruce Dickinson, has been a runaway success, selling over 15 million pints worldwide since its launch in May 2013 and spawning two limited-edition beers — Trooper 666 and last year’s Trooper Red ‘N’ Black porter.

John Robinson, brands manager for Robinsons Brewery, said: “Trooper is a true British success story. Since launching, we’ve reached millions of beer lovers and music fans in over 50 countries and, in the process, helped to fly the flag for British ale in global markets. Most recently we have exported the beer to new territories as far afield as Bosnia, Guatemala, and Ukraine...

Due on January 20 via Anselmo’s own Housecore Records, the five-track offering was produced and performed by Anselmo and Stephen “The Big Fella” Berrigan (DOWN, SYK, PHILIP H. ANSELMO & THE ILLEGALS, EYEHATEGOD, HAARP, CLASSHOLE), and mastered by Scott Hull of Visceral Sound.

METALLICA was joined by Lang Lang during the band’s January 18 concert at LeSports Center in Beijing.

As expected, the Chinese concert pianist played METALLICA’s classic song “One” from the “…And Justice For All” album.

Fan-filmed video footage of Lang Lang’s appearance can be seen below.

METALLICA previously performed the track with Lang Lang in January 2014 at the 56th annual Grammy Awards.

In announcing its collaboration with Lang Lang at the Beijing concert, METALLICA called their joint appearance at the Grammy Awards three years ago “one of the most creative, unique performances of our career.”

Grammys executive producer Ken Ehrlich told ABC News Radio about how METALLICA’s collaboration with Lang Lang came about: “METALLICA’s manager was in China and he met with a guy who prese...

The official lyric video for “Built To Last”, the title track of the tenth studio album from Swedish melodic metallers HAMMERFALL, can be seen below. The disc was released on November 4 via Napalm Records.

HAMMERFALL guitarist Oscar Dronjak: “We wanted to do something simple yet effective, so we recorded this in my studio during tour rehearsals. The computer effects give the video a really cool and unique atmosphere, and we’re super pleased with how it turned out!”

HAMMERFALL kicked off a European headlining tour on January 12 in Bremen, Germany. A North American trek with DELAIN will launch in April.

Drummer David Wallin recently left HAMMERFALL in order to focus on his family life. He has since been replaced by Johan Koleberg, formerly of THERION and LION’S SHARE.