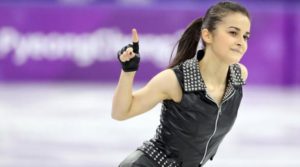 Rock fans have been excited by the musical selections at this year’s Winter Games in PyeongChang, South Korea, which yesterday included AC/DC’s “Back in Black” and “Thunderstruck.” The songs come from 1980’s Back in Black and 1990’s The Razor’s Edge, respectively.
Donning a studded black leather pants suit with a back patch and fingerless gloves, the audience delighted in a short program by Hungary’s Ivett Toth, cheering her on throughout. Her performance earned her season’s best score, though she fell far short of winning a medal.

In a sport where contenders are judged not only for their athletic abilities but also on their image, Toth’s music was an interesting choice... 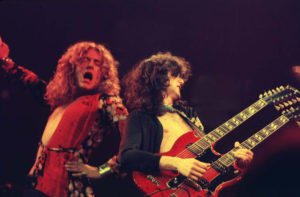 Robert Plant predicted that a celebration to mark the 50th anniversary of Led Zeppelin would take place “somewhere” and that the surviving members were planning to gather to discuss what might be done during the year.
Plant, Jimmy Page and John Paul Jones have already announced a collaborative photo book, while guitarist Page recently said that a new live album is in the works.
“We’re planning to get together and talk about it,” Plant told The Current when asked about anniversary plans recently. “Basically, it’s very difficult to find stuff that still is unheard. … And the great thing about Led Zeppelin was that we didn’t chronicle ourselves. We just kind of went from town to town and sang songs and played guitars and stuff. And then went about our lives.”
He added that he “wi...

ZAKK WYLDE DOESN’T GET ROCKERS GETTING UPSET OVER GRAMMYS 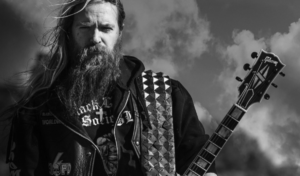 Grammys come, Grammys go, but more often than not rock and metal fans find themselves feeling a bit shortchanged by the representation of the genre. And the same goes for those who play it as well. But during a chat on The Jasta Show, Zakk Wylde shared why he finds it amusing that there would be some upset.
Wylde told the host (as transcribed by Ultimate-Guitar), “Do you know what I think is so hysterical with the Grammys? That any of our friends who don’t want the Grammys actually get upset about the Grammys!”
He continued, “Do you know what Grammys is? It’s the equivalent of any of our friends, or me and you, with our Sabbath and Zeppelin records – we’ll throw in some Allman Brothers in there too – we go to [iconic disco nightclub] Studio 54 and it’s 1978 and we’re like, ‘Man, put on so...

THE OSBOURNE’S SET TO RETURN NEXT MONTH… AS A PODCAST 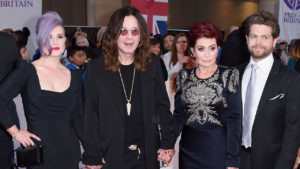 Finally, The Osbournes is coming back! Sort of. The principal subjects of the early ’00s reality show are getting together to do a 10-episode podcast series beginning March 5 with a fresh installment available each Monday. The new show will be launching just as the original series celebrates the 16th anniversary of its debut back in 2002 when Ozzy Osbourne, his wife Sharon and two then-teenage children Kelly and Jack allowed MTV to film them on a regular basis.
According to The Hollywood Reporter, the podcast is designed to catch fans up on what Ozzy and his family are up to these days. There will also be interviews with some of their closest friends, including comedian Sheryl Underwood, Carnie Wilson and The Osbournes executive producer Greg Johnston.
“There’s been talk about bringing Th...