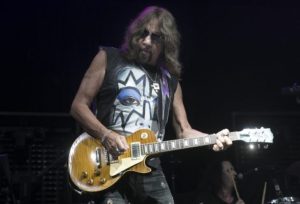 The New Year’s tradition is to start things off with a kiss and the NHL did their best, tapping former KISS guitarist Ace Frehley to perform at the 2018 Bridgestone NHL Winter Classic.
“CALLING ROCK SOLDIERS!! Strike up the band, fire up your DVR’s and/or your winter coats… this just in,” begins a statement found on the legendary six-stringer’s Facebook page which detailed the news. Frehley now joins a performance cast which already included the Goo Goo Dolls during the first intermission as well as Bruce Springsteen’s E Street Band drummer Max Weinberg, who is billed under the Max Weinberg Quartet.
Frehley has been tapped to play his classic solo track “New York Groove” during the pre-game portion of the contest between the Buffalo Sabres and the home team New York Rangers at New York’s ...