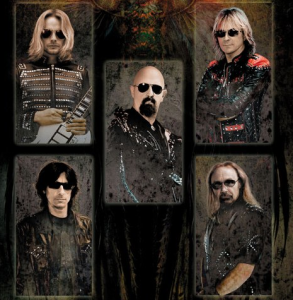 Singer Rob Halford of British heavy metal legends JUDAS PRIEST spoke about the progress of the songwriting and recording sessions for the band’s long-awaited follow-up to 2008’s “Nostradamus”.

“The writing process is complete,” he said. “Now it’s the painstaking work of making sure that you get every single note, every single nuance of the vocal, every tiny aspect…right. We’re still tracking instruments. It’s just a very laborious but enjoyable part of making the record.”

Regarding the sound of the new PRIEST material, Halford said, “It’s hard. It’s heavy. It’s something we think our PRIEST fans will be thrilled with. We know we have a reputation to maintain, and we know we have to deliver something really strong and solid. The album is going to be full of all the great things you love about JUDAS PRIEST — I don’t think I can say anything more than that without being hung, drawn and quartered.”

In an interview with VH1 Radio Network’s Dave Basner, Halford spoke about what fans can expect from JUDAS PRIEST’s next release: “We felt it was very important to follow up ‘Nostradamus’, the last release, and that was a concept experiment and it was a real success for us and the fans loved it, but I think our fans and ourselves as a band, we want to get back to the side of PRIEST that we haven’t heard for a few years and reemphasize and remake those big, heavy metal statements again.”

As for when fans can expect to get the new PRIEST album, Halford explained that he and his bandmates aren’t going to set dates for themselves. “I think that’s the best way to approach it, because it would be wrong to say, ‘On this date, at this moment, the record is coming out.’ But where we’re at now, we’re very, very confident. We’re forging ahead and everything’s looking good, and yeah, it’s looking right. So in the not-too-distant metal future, there will be new PRIEST to listen to.”