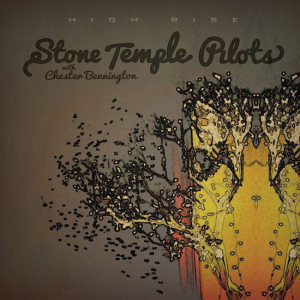 The new version of STONE TEMPLE PILOTS featuring LINKIN PARK’s Chester Bennington will release an EP, “High Rise”, on October 8 via 13Star Records. The effort will contain five new tracks, including “Out of Time” and “Tomorrow”.

“Out Of Time” reached the No. 1 position on both the Mediabase Active Rock and Mainstream Rock chart earlier this month.

“We’re really thankful to all the people listening to our music that made this happen,” says bassist Robert DeLeo. “It feels great on so many levels.”

STONE TEMPLE PILOTS will kick off a North American tour on September 4 in Bethlehem, Pennsylvania. The opening act on almost all the dates will be FILTER. This will be the first major run of live dates, as well as the first official recording, since STP fired founding vocalist Scott Weiland earlier this year and recruited Bennington to take over.

According to The Pulse Of Radio, Robert and Dean DeLeo recently revealed why STONE TEMPLE PILOTS parted way with Weiland. In a radio interview, Robert explained that he thinks that you get to a point in your life where your BS meter starts running down to a certain kind of tolerance and that it wasn’t just a musical decision, but it was a business decision.

Robert added: “It was a quality-of-life decision and that really what it’s about. That’s where we wanted to be. Chester is a person that’s really surrounded by good fortune and that’s something you want to be around. It’s no longer three guys in a room, trying to make a record or trying to get a tour together — it’s four guys in a room.”

Dean explained that they wanted to be able to fulfill their commitment through the band too. He said: “Robert, Eric [Kretz, drums] and I, we want to be able to come to town and give you everything we’ve got and it was getting to a point where we were unable to do that.”

STP will release the new EP through their own label. It will contain five songs, including “Out Of Time”.

STP fired Weiland in February after reuniting with him in 2010 for a series of tours and one self-titled album. The band had previously been on hiatus since 2002, primarily due to the singer’s struggles with drugs and alcohol.

The group sued Weiland in May, accusing him of using the band’s name to advance his solo career, while claiming that his poor performances, late arrivals, and addiction struggles harmed the band’s career.

Weiland has countersued, claiming that the band cannot use the STONE TEMPLE PILOTS name without him.