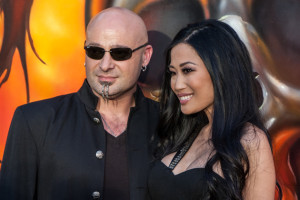 Due to complications with his wife’s pregnancy, DEVICE and DISTURBED frontman David Draiman has chosen to stay close to home until the baby is born. All scheduled DEVICE tour dates between now and the due date of the first week in October have been canceled.

Draiman brought his pregnant wife, Japanese-American model, actress and wrestler Lena Yada, up on stage during DEVICE’s August 11 concert in Toronto, Ontario, Canada at the final stop of this summer’s Gigantour.

Draiman and his wife are expecting a baby boy, Samuel Bear Draiman. Draiman revealed the news of the pregnancy on May 2 on Twitter and also let the audience know at the Revolver Golden Gods awards, where he performed LED ZEPPELIN’s “Whole Lotta Love” with HALESTORM.

Draiman and Yada were married in September 2011. Draiman was asked at the time how he thought becoming a family man might change his music. “You know, I can only imagine that it would give me more inspiration to write,” he said. “I think that when you all of a sudden become a family man, and you have more to worry about than just yourself, your concerns, they build, in terms of things going on with the world, in terms of your life, in terms of your fears and your hopes and your dreams. And so I really think it’ll be a tremendous catalyst for potential inspiration.”

DEVICE released its self-titled debut album on April 9. It debuted at No. 11 on the Billboard album chart, selling 35,000 copies in its first week of release