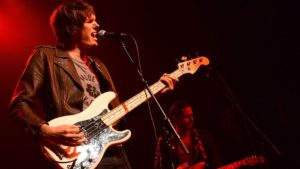 Strokes bassist Nikolai Fraiture dominates the post-punk single “Happenin'” with side-project Summer Moon. “Happenin'” is the band’s second release from their debut LP, With You Tonight, out February 24th.

Fraiture explained how the song’s “chaotic, thumping” vibe previews the record’s energy. “It’s a good entry point into the other songs,” he said. “Sonically, it’s a gateway drug to the rest of the album,” with Jane’s Addiction drummer Stephen Perkins building off the propulsive bass riffs.

Summer Moon first appeared in 2015 with a SoundCloud demo for “With You Tonight,” recorded by a line-up featuring members of Au Revoir Simone (Erika Spring) and the Like (Tennessee Thomas). But the group re-emerged in September 2016 with the official single version of “Tonight” and a revamped line-up including Perkins, Uh Huh Her keyboardist-singer Camila Grey and the Airborne Toxic Event guitarist Noah Harmon.