KORN And STONE SOUR To Join Forces For Summer Tour 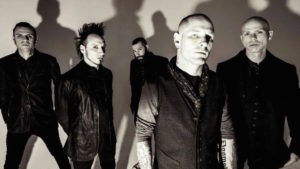 KORN (pictured) and STONE SOUR will join forces for a summer U.S. tour beginning in late June. So far the following dates have been confirmed:

KORN’s latest album, “The Serenity Of Suffering”, came out at the end of October. The track “A Different World” features a guest appearance from SLIPKNOT and STONE SOUR frontman Corey Taylor.

KORN singer Jonathan Davis spoke about getting Taylor to appear on the song. “We were trying to figure out who we wanted to collaborate with, and I’m like, ‘You know, that’s the one, that’s the guy,'” he said. “And I texted him, I’m like, ‘Do you want to be on a new KORN track?’ He’s all, ‘Hell yeah! When and where, what do I do?’ So he did great on the song. I already did my parts, I’m like, ‘Do what you do, man.’ And I like the way he did it, the approach: he starts creeping in underneath the song, you can start slowly hearing his voice under mine, and it crescendos up into the middle part where he sings, and then it’s just full-on at the end, so the song came out great.”

Taylor said that he became involved in “A Different World” after receiving “a phone call, like, ‘Hey, do you wanna do this?’ And I was on the plane the next day. I flew in, and I hadn’t even heard the music. I was, like, ‘Yeah.’ ‘Cause as a fan and as a friend, it was just something that we had been talking about for years. And all the stars aligned and I got to do this track. And it is heavy, dude. It is so righteous. People are gonna lose their minds.”

STONE SOUR has set “Hydrograd” as the title of its new album, due out this summer. Taylor told The Pulse Of Radio that the new disc is a natural progression from the band’s last studio efforts. “All the promise that we showed on the ‘House Of Gold And Bones’ albums, we are really trying to kind of push even further with this, and it’s exciting, man,” he said. “Style-wise, it’ll feel like it’s kind of all over the map, but it’ll be very, very unifying when everybody hears it. I’m really excited.”

Taylor recently told Matt Pinfield about the new disc’s musical direction: “It is such a great amalgam of all of these different styles that we just absolutely love. It’s got a little bit of the heavy, like we like to do, but it’s also way more hard rock — way more rock ‘n’ roll and hard rock than heavy. I mean, there’s even a little bit of punk in there. And there’s an energy there that is gonna decimate and blow away a lot of stuff that comes out [this] year. That’s how excited I am.”

The new STONE SOUR album is being recorded at Sphere Studios in North Hollywood, California.

STONE SOUR’s last full set of new material was the “House Of Gold And Bones” double album, which was released in two parts in 2012 and 2013. The band also released two EPs of cover songs in the last couple of years, “Meanwhile In Burbank…” and “Straight Out Of Burbank”.

Taylor returned to the STONE SOUR fold this year after his other band, SLIPKNOT, completed the touring cycle for its 2014 album, “.5: The Gray Chapter”.