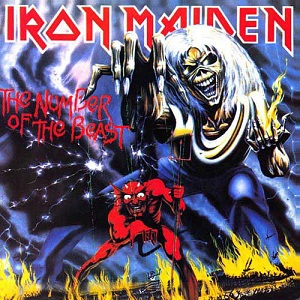 After finding Paul Di’Anno‘s replacement in the former Samson singer, Iron Maiden performed a small run of shows before hitting the studio to record the follow-up to 1981’s Killers. With bassist and founder Steve Harris‘ well of songs running dry, it was the first time the band entered the studio without a significant amount of music ready to go. Esteemed producer Martin Birch oversaw the recording once again, having produced the aforementioned Killers. He would notably draw out the recording process, meticulously looking for a certain sound and insisting the band perform take after take after take.

“Martin would always drag out a little bit more — to the point where sometimes bits of furniture went flying across the studio and things like that out of frustration,” said Dickinson in Iron Maiden’s Early Days documentary. Echoing these statements, Birch commented, “I’d drive [Dickinson] crazy. I think he ended up throwing chairs around the studio and screaming and yelling and went home with a blinding headache threatening me he was never ever going to sing again. But I think now when he listens to it he realizes, ‘Yeah, he was right.’”

These unrelenting demands did more than simply find the perfect vocal take; they brought out one of metal’s most defining moments. Frustrated in the studio, Dickinson unleashed one of the most savage heavy metal screams in history on “The Number of the Beast,” which has yet to be replicated, though the singer has come alarmingly close onstage over the years.

“I enjoy making records with Martin. They’re not always comfortable, but they’re always bloody good,” Bruce stated. “Bloody good” is an understatement when discussing The Number of the Beast and Birch revealed, “I had the same feeling on The Number of the Beast as when we did the Deep Purple album Machine Head. It was the same kind of atmosphere — the same kind of feeling that was going on. Something really good is happening here and it’s exciting to do and I think that excitement comes through on the album.”

Perhaps to Dickinson’s amusement, Birch seemed to be haunted by the song. Sounding more like myth but is, in fact, truth, the producer was involved in a car accident to where the bill amounted to £666. “People don’t believe this, but he changed it to 667 pounds,” Harris said. “I mean that was only the one song we did, but he’s done a lot of work with Black Sabbath, and apparently, they’re into that sort of thing. So, I don’t know, maybe there’s something to it…” [via Metal Rules]

The song itself was inspired by a dream Harris had after watching the film Damien: Omen II with the lyrical ideas coming from the Robert Burns poem Tam o’ Shanter. While the lyrics merely exclaim “6! 6! 6! / The number of the beast…” religious groups, predominantly in the United States, staged protests and publicly burned Iron Maiden records, accusing the band of being Satanists. The famous spoken word intro is taken from the Book of Revelation and Maiden had originally intended on horror legend actor Vincent Price doing the voice over. His asking price of £25,000 was too high, so they settled on the lesser-known and equally eerie-sounding Barry Clayton.

Leading the record was the single “Run to the Hills.” Released over a month prior to the album and two weeks before Iron Maiden’s U.K. tour was set to kick off, it was the first single from the group to crack the Top 10 on the U.K. Singles Chart. The B-side, “Total Eclipse” (written by Harris, guitarist Adrian Smith and drummer Clive Burr) was selected over “Gangland” (written by Smith and Burr) as the band knew the song that was not selected would make its way onto the album. It was a decision they later regretted, feeling “Total Eclipse” would have made for a stronger album track than the raging speed of “Gangland.” The song was not included on the album until 1998, where it appeared between “Gangland” and the epic closer “Hallowed Be Thy Name” from then on.

The two cuts represent Burr’s only writing credits with the band and his replacement, Nicko McBrain, wouldn’t receive his first writing credit until 2003. Prior to The Number of the Beast, Paul Di’Anno and guitarist Dave Murray were the only members to take an active role in writing in Iron Maiden, but with Harris’ stockpile depleted, the need for other members to step up was paramount. Smith was the biggest secondary contributor, lending a hand on not only “Gangland,” but “The Prisoner” and “22 Acacia Avenue” as well.

The Number of the Beast is where Iron Maiden began to truly gain notoriety for pulling influences from film and literature, a source they would return to time and time again throughout the rest of their career. “The Prisoner” was based off the British television show of the same name, taking the dialogue from the program’s opening sequence. The other Smith tune, “22 Acacia Avenue” was a leftover from his pre-Maiden days in the band Urchin. With Harris’ guiding hand, the two reworked the song into the thematic successor to “Charlotte the Harlot.” The Harris-penned “Children of the Damned” was also inspired by film, taking influences from Village of the Damned and its sequel, Children of the Damned.

Closing out the record is arguably Iron Maiden’s finest song of their illustrious career. “Hallowed Be Thy Name” is both a band and fan favorite, only ever having been omitted from a setlist on the ‘Maiden England World Tour’ between 2012 and 2014.

These songs, now Iron Maiden classics, all arrived with the stunning Derek Riggs artwork which famously depicts the band’s beloved mascot Eddie pulling the strings of the marionette Devil. The renowned artist put a spin on this visual, adding an Eddie puppet for the Devil to control, leveling the field. The cover was originally submitted as a single for “Purgatory,” a cut off Killers. Upon receiving the cover art, manager Rod Smallwood shelved it for the next full length as it was incredibly high quality — too high of quality to use on a mere single. An error at the pressing plant resulted in the now iconic blue sky background, though this was swapped for a dark grey background for the 1998 remasters and all pressings onward.

Clive Burr made his last appearance with Maiden on The Number of the Beast, playing his final show with the band in December 1982. They did their best to retain his services at the time and he had been given three months to “sort himself out and he didn’t,” said Harris. Time was of the essence and they had to let Burr go, who was struggling with the demands of the increasing tour regimen, paving the way for Nicko McBrain to enter the fold, leaving his old band Trust, who had toured with Maiden in the past.

In support of the record, Iron Maiden embarked on the ‘Beast on the Road’ tour, the second longest tour of their career. Spanning 18 countries, the band played 184 shows in just 10 months, only to best themselves two albums later on the mighty ‘World Slavery’ tour in support of Powerslave. The Number of the Beast marked the band’s first No. 1 album in the U.K. and has been certified platinum in the U.K., U.S. and Canada. As of 2010, it had sold more than 10 million copies worldwide.