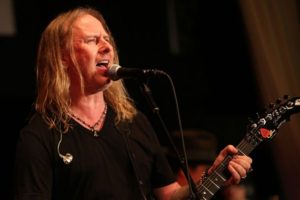 During a recent Q&A session at Rock Fantasy Camp, Alice in Chains’ Jerry Cantrell revealed that Layne Staley encouraged him to take on a more active role in singing lead vocals.

As Alice in Chains began to take charge of the ’90s alternative rock scene, the Seattle group dwelled further and further on their two-man vocal attack, conjuring some of rock’s most beautiful and unnerving harmonies.

“I had a pretty strong background in choir throughout junior high and high school,” Cantrell said, according to Alternative Nation. “I was like the president of my choir in high school. We used to perform acapella, four-part harmony acapella state competition type stuff, like Bartok, great classical type stuff, so kind of dark brooding harmonies and stuff like that.”

“Plus all the bands that I’d been a fan of used harmonies or had multiple singers: Kiss, the Who, Pink Floyd, the Beatles are the ultimate one, the Eagles,” the singer and guitarist continued. “I always loved bands with multiple voices and harmonies. So the combination of he and I, we developed early on an easy way to work together that way. As far as writing that type of stuff, if I didn’t have it, he had it. If he didn’t have it, I had it. We developed a language and sound by singing that way.”

“As it went on, like with the [Sap] EP I started to sing some lead, and continued to grow along those lines with every record that we did. My role became bigger, with the support of Layne egging me on to sing more, it really became a two vocal band. Having [current AIC singer] William [DuVall], William and I work within the same context, although they’re two completely different guys, two completely different voices, but it works, because we work together in the same sort of context.”

Alice in Chains are currently in the studio working on the follow up to their 2013 LP, The Devil Put Dinosaurs Here, which debuted at number two on the Billboard charts. Earlier this year, Cantrell released a new solo song, “A Job to Do,” for the Keanu Reeves film John Wick: Chapter 2.